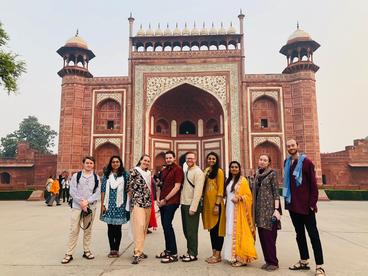 I received a Boren Scholarship in 2018 to study Urdu in India. As part of this, I spent two months at UW Madison in their intensive summer language program and then spent almost 9 months living and studying in Lucknow, India.

I knew that once I was finished with my studies in Morris that I want to spend some time living overseas while studying a language, so I started searching for a way to do that. I first came across and applied for the State Department’s Critical Language Scholarship for Urdu, but did not receive it (which ended up being somewhat of a blessing for me). However, I ended up coming across the Boren Awards and knew that it was exactly what I wanted. Not only is there a LOT more flexibility and choice with the Boren Awards, in terms of location, language, duration, etc., it also comes with the added benefits of helping you get a job in the federal government. As someone who has long wanted to have a career in public service, the Boren Awards made perfect sense to me.

I specifically applied for the South Asian Language Flagship Initiative as it included the summer program in Madison and also had a structured fall program in place. I decided to add a spring component as well to increase my time learning overseas. My experience gave me lots of opportunities for intimate classroom learning conditions where we had only four students in class and opportunities for me to have one-on-one time with professors as well. Additionally, we had the option of taking an elective class after school, with choices of cooking, music and dance classes, calligraphy, and other options as well.

Outside of the classroom, I was able to learn about various aspects of Indian life while living with a host family, meeting various people in Lucknow, and through my travels across Northern India. I was invited to and able to participate in various cultural and religious events. I also attended a few weddings where I always met new people with whom I could practice my language skills and learn more about India.

Overall I am very happy with my Boren experience and am very thankful to be a recipient. I think this is a wonderful program for those interested in foreign language learning and use, with a goal of having a career in the federal government. I’d highly recommend any Morris students who are interested in learning a new language or want to continue their studies overseas with similar career goals to apply for this program. 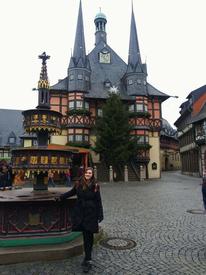 I am currently serving as a Fulbright English Teaching Assistant (ETA) in Magdeburg, Germany. I assist English teachers in the classrooms at Werner von Siemens Gymnasium (grades 5-12). I am gaining invaluable teaching experience that will lead to my future endeavors as an instructor. In my day-to-day life, whether that be walking to the bakery for fresh Brötchen or riding the tram downtown, I am immersed in Germany’s language and culture. In my free time, I enjoy traveling, writing poetry, and taking long strolls around the city. I am involved in the teacher’s choir and have started an afterschool poetry club. In my travels, I have enjoyed visiting numerous Weihnachtsmärkte (Christmas markets) all around Germany. I also am enthralled by all the medieval architecture and rich historical background in this country. 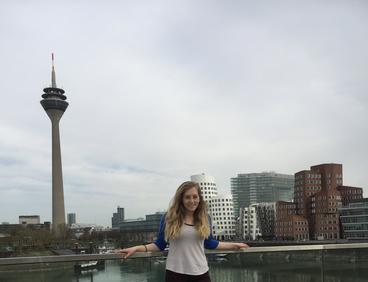 "Growing up in a small town, I always felt like I was only exposed to a small amount of what the world really had to offer. As I got older, I became increasingly curious about what life was like in other parts of the world. When I reached college, I began studying sociology and anthropology, where I learned more about cultures and people in different societies around the world. I heard about the Fulbright program while I was in college and was excited to hear about the opportunities Fulbright had to offer. I knew I wanted to experience not just visiting- but living in a different country for a longer period of time.

I chose to apply for a Fulbright grant to Germany because I was interested in the culture, history, and language of Germany. Fast forward to over half a year after I applied, I found out I got the grant. I was in shock when I received the news and ecstatic thinking about what was about to come next.

A couple weeks a finalist, I learned that I was placed in Düsseldorf, Germany and would be working in a gymnasium (secondary school). My primary role at the school was to help teach English and to help students learn about American culture. However, I learned as much from the students as they did from me. For example, while teaching about food I learned that a lot of food Americans see as “bread” Germans see as “cake.”
Being in Germany for almost a year allowed me to learn things I never would’ve noticed if I had only been in there for a short period of time. For example, I did not realize until a couple of months of living at my apartment that there were two “Stolpersteine” on a sidewalk of where I frequently walked. “Stolpersteine” are stones in the ground that commemorate victims of the holocaust. I had learned a lot about German history but it was surreal to be walking on it.
I was also able to experience different seasons and holidays in Germany during my time there. One of the most enchanting experiences would be seeing the Christmas markets around the Cologne Cathedral. The smell of warm Glühwein (spiced wine) and taste of Lebkuchen is one that I will indefinitely be craving around Christmas time. There were also multiple holiday breaks during the school year where I was able to do some traveling around other parts of Europe. My favorite experience was taking a solo trip to Switzerland and hearing the stark difference in German dialect while getting lost in the beautiful landscape.
My Fulbright year transformed my mindset and shaped how I think today. Before Fulbright, I probably would not have felt comfortable traveling to a different country by myself. Now, I’ve gained a greater level of cross cultural communication skills and independence to feel comfortable traveling on my own. I’ve also become more comfortable interacting with people who don’t speak English, even if we don’t speak a mutual language. I use the cross cultural communication skills I have learned every day by keeping an open mind and trying to understand ways of thinking by others points of views. Fulbright granted me the opportunity to fully immerse myself in a different culture and helped facilitate cross cultural exchanges of ideas and knowledge 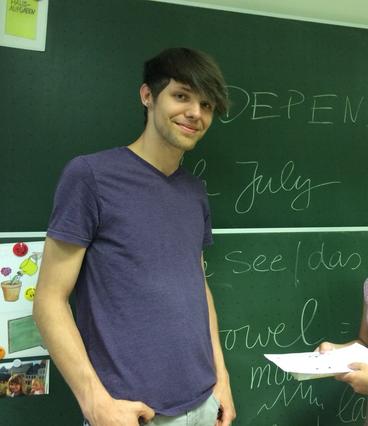 During the 2017-2018 German academic year, it was my assignment to assist in English lessons at the Paul-Guenther-Schule (Oberschule der Stadt Geithain) and the Geschwister-Scholl-Schule (Oberschule der Stadt Leipzig) as part of my Fulbright grant. As this was my first major post-bachelor experience, I went into the classroom knowing that as much as I had to share with the students (5th-10th grade), I would also be learning a lot as well. Not only was my Fulbright grant my first formal teaching experience, but the fact that it was in Saxony (with it's own distinct dialect and culture) made it an even more challenging and rewarding experience as well.

I applied for the Fulbright in the interest of sharing my northern Minnesotan culture with a community in Germany, and also taking something back home at the same time. The benefits of cultural exchange are numerous, and I sought to take part in this process for the benefit of Americans and Germans alike. To my surprise and disbelief, I was selected as a finalist in the spring of 2017. With a great sense of excitement also came a bit of nervousness, as this grant also meant a lot of responsibility and changes. Although I didn't know it at the time, the finalist email I received would lead me not only to a Fulbright year abroad, but also a second year as I have retained my position in Leipzig for the 2018-2019 year.

I often thought about the value of my position and how much I was actually benefiting the schools and students. After my first year, I realized that my work in the classroom would have some impact on the futures of the students, and that gave me a great sense of accomplishment. Not only had I improved my language skills, but I watched them do the same. Of course, in building a sense of community, it wasn't all just studying and lessons. I was lucky enough to accompany my colleagues and students on various field trips and other excursions. These included a trip to the Leipzig trade fair, an indoor water-park, the community pool, and a week-long trip to London (chaperoning 42 students). In addition to these things, I'll likely be in lifelong contact with the friends I've made in Saxony and Bavaria.

My professional relationships in Germany have changed dramatically as well. At a younger age, I never would've imagined myself sitting in the teacher's lounge, but now I'm able to see the school system from the other side of the desk. My colleagues in Geithain, Leipzig, and Liebertwolkwitz have been wonderful to work with so far, and I've learned a lot of valuable lessons about classroom practices which I probably couldn't learn from a textbook.

An experience abroad can't really be fully described by words and pictures alone, but to say the least, my time abroad so far has been life changing both professionally and personally. With what I learned during my Fulbright year, I was able to secure a second year of teaching through the Pädogogischer Austauschdienst (Pedagogical Exchange Service) in Germany, Upon my return in June of 2019, I hope to use my experiences and skills to pursue an M.A., in addition to continuing with some form of teaching. As much as I've grown accustomed to life in Leipzig, there's something about coming back to my home community and sharing what I've learned that's also appealing to me as well.