Johnson, who served as the third chancellor at UMN Morris from 1990–98, spoke about the maps during a reception  held on Thursday, Oct. 20, 2022, in Briggs Library. “Giving them up was akin to seeing my kids fly away from the nest but it has to come and I’m going to say it again and again, I’m so grateful that they will be in a place where they will be loved.”

Three of the maps from the collection were personally owned by the Johnson family. They include a 1530s Olaus Magnus reproduction of the Marina Carta and the treacherous seas between the Nordic lands, purchased in Hamburg in 1969; Peter de Wit’s 1539 Norvegia; and Peirre du Val’s 1530s Danemark, purchased in Oslo in 1966.

The remaining two maps were purchased by Johnson specifically for Briggs Library. One of these is an 1806 copy of Herman Moll’s map of Denmark, Sweden, and Suomi Finland, which also shows Laplanders engaged in various activities. The other is a map of Iceland drawn by Georgio Carolo Flandro and published in the mid-1600s. These maps are copperplate engravings and were purchased from Ruderman Antique Maps, Inc. of La Jolla, California. They are available for public viewing at the Briggs Library, on the main floor near the reference book collection. 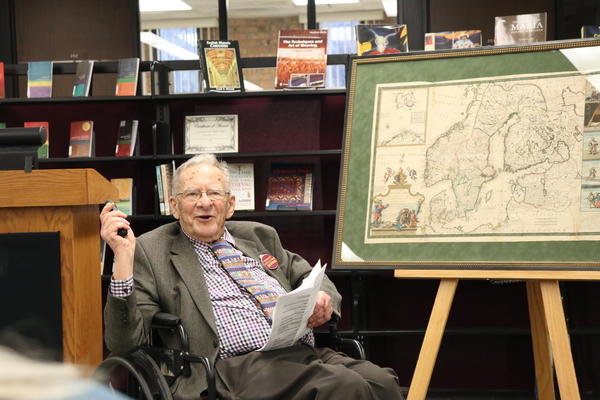 Submit an event to the campus calendar